The past couple years, USA has become hostile territory to pedophile rings. The Queen’s realm, by contrast, is persecuting the most high-profile whistleblower of gangs pimping little girls. And the famous English decorum doesn’t stop the royal entourage raping little boys. After Prince Andrew’s recent assertion that honor is what kept him friends with convicted pedophile Jeffrey Epstein, shall we assume it’s pure chivalry that dismisses Ghislaine Maxwell’s crimes against children?

"Why have [Britain’s Prince] Andrew Saxe Coburg Gotha and Ghislaine Maxwell never been interviewed by the Metropolitan Police over trafficking a minor into the UK for sex?" ~ Craig Murray


The charity is endorsed by some of the same elites involved in Pizzagate. NBC’s Megyn Kelly’s puff piece helped cover for James Alefantis (Rothschild?) during the Comet Pizza scandal; Megan Kelly also led the charge to smear people who spoke up about Epstein years ago.

I love the ocean and idealism. Yet noble causes are often a front for the worst mafias, shredding the fabric of civilization by casting doubt on genuinely altruistic organizations (like mine.) Spy agencies notoriously use religious and medical outreach as cover for political machinations that serve their deep-state owners. But the strongest dynamic today has climate-change fantasies destroying democracy. (Using environmentalism to whitewash crimes is called greenwashing.) Ecology has become a front for tyranny. The globalist cabal’s scheme to “save” (rule) the world would have succeeded if Trump hadn’t gained office.

Epstein was Exhibit A in that cabal’s system to control powerful puppets like Bill Clinton and Prince Andrew. Epstein’s pimp Ghislaine Maxwell is Exhibit B. So where is she? Why isn’t she in jail?

Maxwell has been sued by rape victims and issued one a death threat. But she has not been charged anywhere for her crimes. She disappeared after her bizarre public-relations hoax involving photoshop and a disingenuous book review:

The hoax implied that Epstein had been a hero of espionage. Maxwell’s father, the racketeering mogul Robert Maxwell, was an operative for UK’s spy agency MI6 before the infamously anti-Semitic Brits claimed he was “loyal only to Israel.” Her dad spied for Israel’s Mossad as well as the KGB. So why did the FBI protect Robert Maxwell? Have all those intelligence bureaucracies long been in the thrall of the globalist cabal’s limitless wealth and secret Illuminati fraternities? One analyst says “the networks to which Epstein was connected were not Mossad-exclusive, as many of the individuals close to Epstein — Lesie Wexner, for instance — were part of a mob-connected class of oligarchs with deep ties to both the U.S. and Israel.” Extreme left-wing journalists (globalist communism’s useful idiots) are eager to blame Israel alone, the classic Illuminati trick of framing Jews for scapegoats and patsies. (Free speech is the foundation of all human rights. How best to exploit anti-Semitism to destroy it? Answer: flood Western countries with a religion that vows to obliterate Jews.)

So where does Maxwell’s PR stunt come in? The photoshop was so ham-fisted, either it was a set-up to discredit her further, or Maxwell was simply left to her own devices.


Or it could be a double bluff. It’s no accident that our ruling elite worships the Prince of Deceit. Confusion and chaos are their favorite tools. (The DNC calls it “muddying the waters.”)

Their lies are a spiritual pollution worse than any toxins we spew in the ocean. Love of truth will allow us to triumph over the cabal’s wars, greed and child sex slavery. 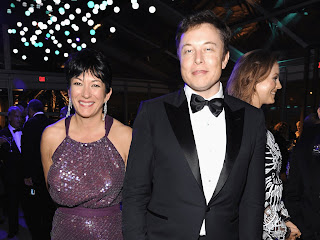 With Elon Musk. Ghislaine Maxwell is a pretty name, so I
propose we dechristen the poxy slag as “Ghoulgristle MaxSec.”

The author VC Bestor is Director of the non-profit
FangedWilds.org.
"Find the meat of the matter"
V.C Bestor on Twitter,
LinkedIn and GAB 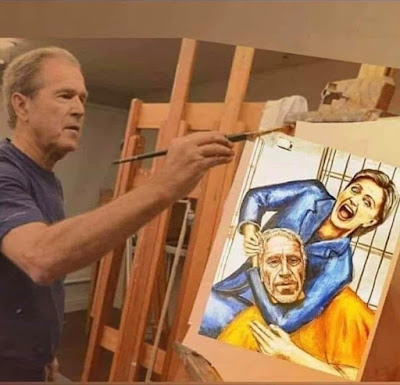 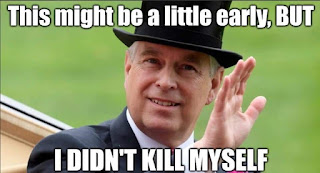 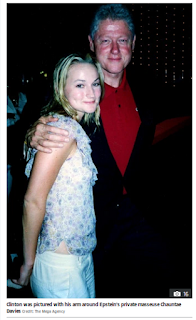 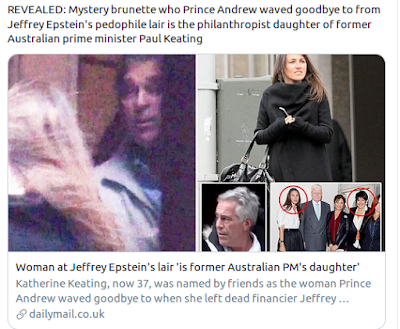 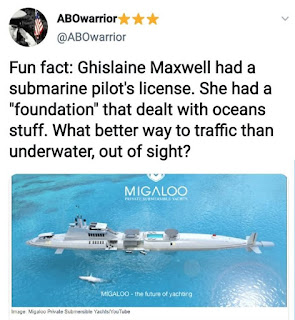 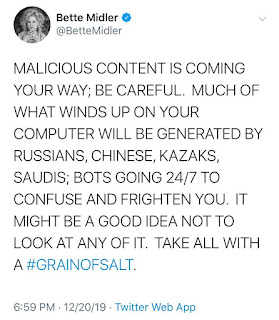 Well, I'm American. Now who's hiding what, and WHY? 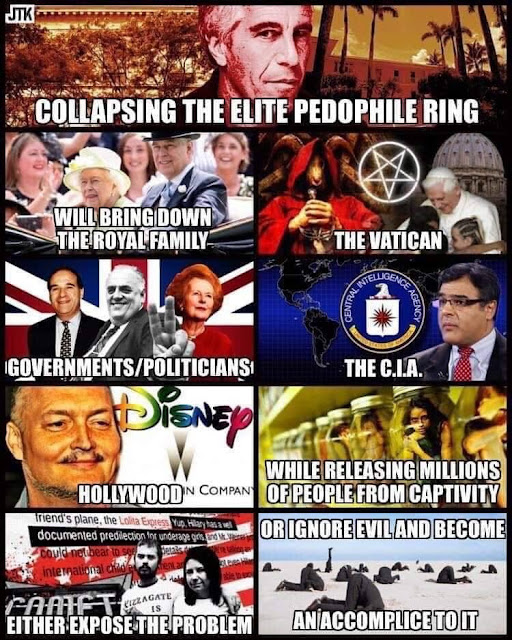 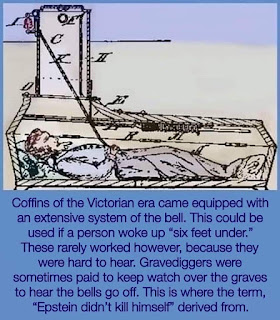 Free Life Vest for the Drowning

The stranger across from me asked me to watch his luggage. Doesn’t TSA warn you about that? But the guy didn’t say, “I decapitate Jews; please watch my bag” so I said sure, and he walked off. Then a Portland gent tried to sit in the stranger’s chair. I stopped him by saying, “That’s taken. But you can sit by me.”

Turns out that the Portland man runs a foundation that supplies loaner life vests at boat ramps along our waterways. “I’ve seen those,” I enthused. “Great idea. I wondered who did it, and now I’ve met Mr. Life Jacket himself!”

He complained that Trump’s tariffs prevent him from getting the cheap vests he wants from China.

“Now China’s outsourcing them to Vietnam to get around the tariffs,” he continued.

“Why can’t we just make them in America?” I asked.

“We couldn’t find a source in America,” Portland man said, standing up probably to go throw something away.

“China doesn’t care if we drown,” I ejaculated to his back. “We shouldn’t be dependent on China for our life-saving devices,” I announced.
People stared.

[97% of antibiotics in USA come from China] 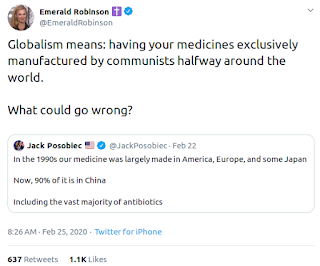 When Portland Man sat back down, he tried to change the subject by asking me, “What do you do to keep busy?” 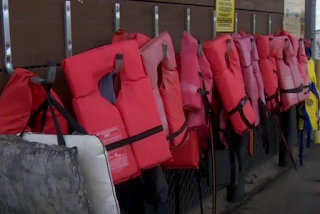 My answer: “I support my own country’s trade deals.” I would have launched into “I’m Proud to be an American” while, one by one, the other travelers in the waiting area joined their voices with mine. But I’d failed to have the foresight to organize a flash mob. So instead I just quietly got in line to board my flight. Of course I first said, “Thanks for the life vests,” while the gentleman graciously shook my hand.

Oh yes, the first stranger did come back for his luggage; his bag didn’t explode.


Speaking of terrorism, remember 9/11? I’ve been thinking about those Princeton random-event generators that reportedly predicted an effect on mass consciousness of the September 2001 demolitions and missiles. (Yeah. Wake up!) Did the machine register the aligning brainwaves of a few score Muslim extremists? Was the anomaly a reflection of the excitement in the elite cabal that planned the simultaneous mirrored NORAD exercises; the nanothermite in Building 7 and the Towers; the miraculous cell-phone calls from impossible elevations; the disappearance of passengers; the trajectories that actual planes could never trace, et cetera? Or are there corrupt, complicit scientists that just fudge the data somehow on specific dates? That hoax would enforce the mind control of the cabal’s minions. “Look what our magnificent will accomplished, to the glory of Lucifer!”

(Say what? Who’s the crazy one? Study this link for a few hours and then… wake up! Get to work thinking the unthinkable. Arbeit macht frei.)

Other "global consciousness" events that supposedly triggered the random-number irregularities include the murder of Princess Di (the Queen is sweet like I’m a pineapple), and the 2004 tsunami (a deep-sea atomic bomb, perhaps? How do illicit arms dealers advertise their fanciest wares? Do our satanic rulers use floods for their own agendas?)

Trump haters are drowning in a sea of lies. Like a free life vest, this blog aims to buoy you up and it was manufactured right here in the grand ol’ U.S. of A.

The author VC Bestor is Director of the non-profit
FangedWilds.org.
"Find the meat of the matter"
V.C Bestor on Twitter
and GAB 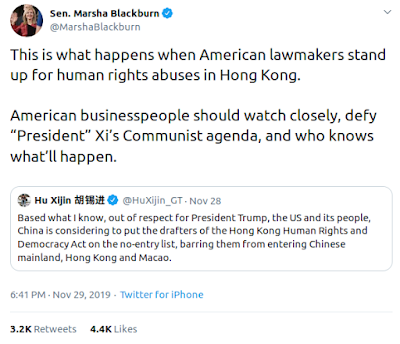